With the plans to kill the wallet for good, Google unveiled the Hands Free experimental payments app. Hand Free app will allow you to pay for items you bought in stores with your phone in your pocket. Both Android and iOS apps depends on location services, Bluetooth, and Wi-Fi to establish when you are close to a participating restaurant or retailer. One great thing about Hand Free is that it allows you tom pay stores quickly, easily and totally in a hands-free manner.

At the completion of your transaction and you get to the cashier, I will pay with Google is all you will tell the cashier. At this point, the clerk will then verify your identity with a photo on their side to seal the deal. At the moment, you can only get this service at the southern end of the San Francisco Bay Area. The stores taking part are Papa John, McDonald, and many other local retailers not mentioned by Google.

Hand Free was initially introduced in May last year at Google I/O developer conference and it is intended to be a buddy to Android Pay – different payment service owned by Google. Android Pay now boasts almost 9 million registered users. Nevertheless, with this development, Google wanted to look at what the future would hold for mobile payments.

You will be identified by the cashier with your photo and the initial you submitted to Hand Free. However, it was gathered that Google is working on putting into operation an in-store camera system that will validate your identity automatically by taking a picture and checking it again with your Hands Free profile. As soon as the transaction is completed, all images captured by the Hands Free camera will be deleted right away.

Square and PayPal have tried related initiatives before and both failed to take off, due to the fact that there was a limited number of participating merchants and the absolute vastness of trying to substitute credit cards and cash. The most mainstream of Google’s payment options is the Android Pay that allows you to put your phone near a NFC terminal to pay. This is because it doesn’t need anything further than upgrading current card swiping tech. As a result, it is not yet clear how far Hands Free can spread, even if it eventually removes the phone from the equation entirely.

Hand Free works in a simple way. All you need to do is to first download a matching Android or iOS app, enter your initials, then select a payment method (either debit or credit card), and then upload your photo.

Security Flaw in Galaxy S8 can create trouble to Samsung 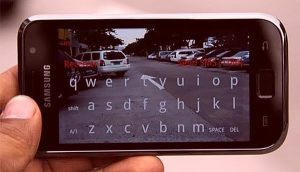