Messaging forms a significant part of tech companies such as Facebook, Apple, and Snap. The services they offer a platform for people to communicate in different ways. Facebook messenger has been a popular platform for people however Google has not been able to establish its messaging app.

Recently, Google made an important announcement related to Google Messenger, its flagship app for messaging. The app will now have a new name, while it continues with the same look and feel. From now on, Android devices around the world will have Android Messages instead of Google Messenger.

The new name does not add any value to the messaging app. In fact some people believe that this could be a wrong move as the former name was open and flexible. The name ‘Android Messages’ is rather strict and it focuses mainly on the Android devices. So, when Google opens up to more platforms such as web and Chrome OS for messaging, people may find the new name a little confusing.

The changelog on Play Store says it’s the same app with just a different name. Apart from the change of name, Google has also included some stability improvements and bug fixes. However, it can be expected that we may soon get to see new features being added to the messaging service.

As per Google, adding new and enhanced features to the supported carriers is easier than before. People need a messaging app that allows them to share high quality photos, read receipts, group chat, and do much more.

Many people believed that Allo would be the messaging platform for Google now and fin the future too. The users need an app that can have SMS support other than other services. While the developers of Allo are busy providing support for desktop, Google has made this important announcement.

Until any further update comes from Google, the present scenario is that Google’s messaging platform will now be known as Android Messages. It is the same as Google Messenger with just a new name. The features are pretty much the same as the old messaging app.

To make things simpler and more constructive, we hope that Google might strip down its messaging strategy and come up with three different apps – Phone, Android Messages, and Duo.

We hope Google comes up with a netter name than Android Messages, and offer additional features that enhance the messaging app! 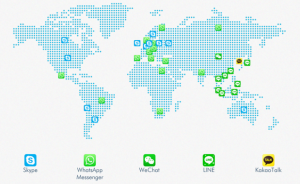 Social Messaging Apps have become a Rage these Days