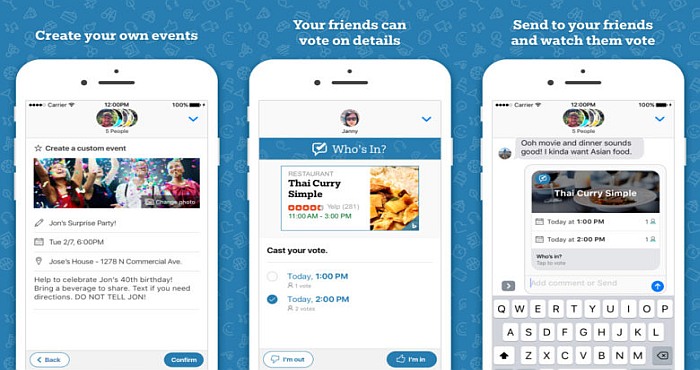 Microsoft has received mixed feedback on its various social media platforms. Recently, the company has jumped back onto the social media market with a new addition to iMessage– Who’s In. It’s unclear whether the app will do well or not, as Microsoft’s previous apps haven’t gotten the five star ratings that the company hoped they would. They remain hopefully, though.

The app’s goal is help groups of friends plan for big events such as movies, parties, and dinner meetups. Who’s In uses the Bing search engine to search for hangout locations from within the messaging-based app. The location suggestions come from Yelp and Trip Advisor- both websites work together to find users and their friends the best locations to meet.

The suggestions range from restaurants to movie theatres, all the way to parks and hiking trails.  Users can also create events within the app, and have the ability to edit their event’s time and location. The app also allows users to invite their friends to the event through the app via a quick message.

The other users within the event can chat using the group chat feature, and even suggest alternative places to meet, or other plans.

The app targets Apple users who spend their free time using SMS messaging through iMessage to make plans. Currently, the app can only be accessed through an iMessage. It is part of iMessage’s micro platform that was introduced late into last summer and marketed as a new feature of IOS 10.

Previously, Google launched an app called Who’s Down. The app was very similar to Who’s In, as it allowed users to make plans and communicate within the app. Unfortunately, the app was taken off of the market after it was clear that the app wasn’t going to gain popularity.

Read More >>  IMO Messenger is a Perfect Alternative to Skype

The same fate might be in store for Who’s In, depending on how many people use the app and how the ratings are for the app once it catches on and is downloaded by enough users.

Surely, if the app goes off the market, Microsoft will come up with a new app to put in its place. The company hopes that Who’s In will be their successful breakthrough app and push them into the social media and messaging spotlight.

If you’re an Apple user, will you be jumping onto this app’s bandwagon? If not, how come? If so, what are you most excited for?

Posted in News Tagged with: iMessage, Messaging App, Who's In