Messaging apps have come of age and they are now taking a step further towards ensuring user privacy. To do that, WhatsApp recently announced that it would be using end to end encryption for all users. This would make it impossible for anyone to intercept the conversations on WhatsApp Messenger even if that person is an employee at Facebook, the company that owns WhatsApp.

Google’s rebranded messaging app is now called Allo. Just like WhatsApp, Allo has also announced that it would support end-to-end encryption. To make this better, both WhatsApp and Allo make use of a secure-messaging protocol designed by the San Francisco-based developer of Signal, another popular messaging app.

So, now the three big players in messaging apps industry – WhatsApp, Facebook and Allo use end-to-end encryption. The one main thing that separates WhatsApp from Allo is that it is based on open source. This means the app’s code is available freely by the experts to examine and analyze it for any flaws or security issues.

Another important feature that sets Signal apart from messaging apps like WhatsApp is that the former has no business model unlike other popular messaging apps. Facebook and Google for example earn their revenue out of selling ads. Open Whisper Systems is supported by donations and grants. As the company has no specific advertising to target, it stores comparatively less user data.

Similar to WhatsApp, the messages that are sent to Signal follow robust encryption, and Open Whisper Systems does not know how to decrypt them. So, what happens to the message metadata, contact list of your phone or cloud backups?

The privacy policy of Signal is concise and unlike WhatsApp Messenger, the app does not store any message metadata. As per Moxie Marlinspike, the founder of Open Whisper Systems, the closest information that Signal stores on its server is the last time the users were connected to server. The precision of this piece of information may however be reduced by day, hour or minute.

The users of Signal messaging app can share their contact list if they wish to find other users. In WhatsApp, this feature is options, however it is very much recommended. To ensure your privacy, Signal does not send the contact list to the server directly. Instead, the app uses the cryptographic hash function to disguise the phone numbers before sending the list to the server.

Signal has a small user base and fewer features, however if you are looking for enhanced security then Signal is a great option you can trust. 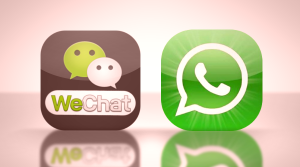 WhatsApp & Wechat are the Best Messaging Apps for Android